George Adamson Photos....
Photos from Brian, an Admirer and Friend of George.... 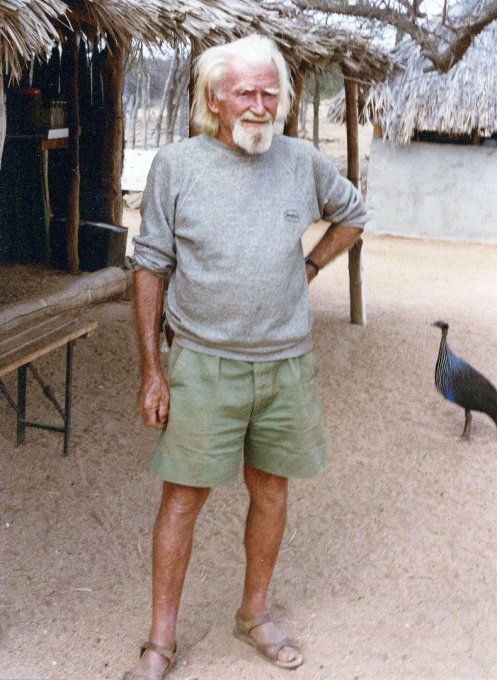 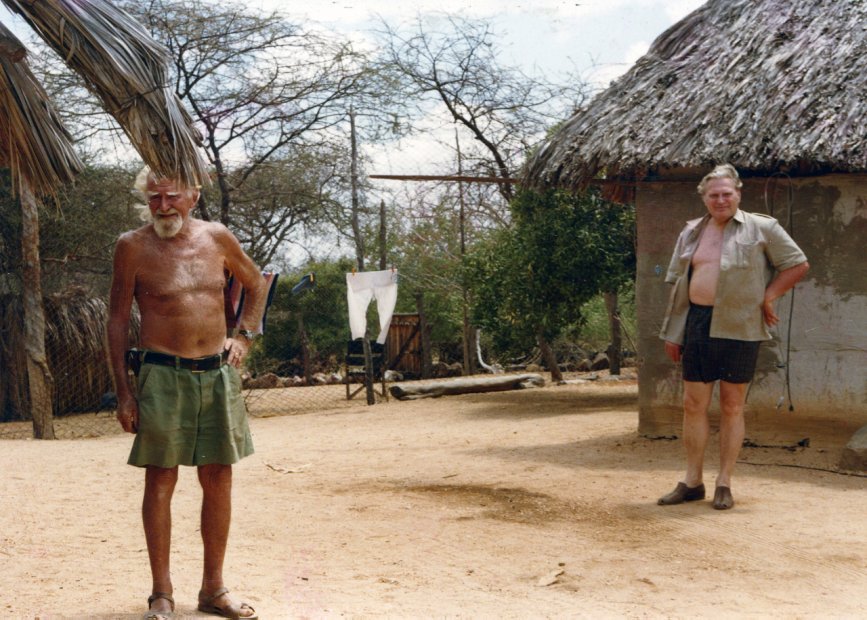 George Adamson with his friend Dr Wolfgang TH Koos (a Neurosurgeon)
At Kampi ya Simba - Kora Reserve in Kenya
NOTE:  Dr. Koos was a Neurosurgeon from Vienna.  Dr. Koos and his wife Ingrid kindly
told George about a non profit group which could help with having George's
eyesight restored.   George stayed with Wolfgang and Ingrid while in Austria.
Dr. Slezak operated.  George said his improved vision  made all the difference in the world to him.
During his one month recovery period George stayed at the home of his dear friends Virginia McKenna and
husband Bill Travers in Surrey England. (See photo of George and Bill at Bill's home on this website.) 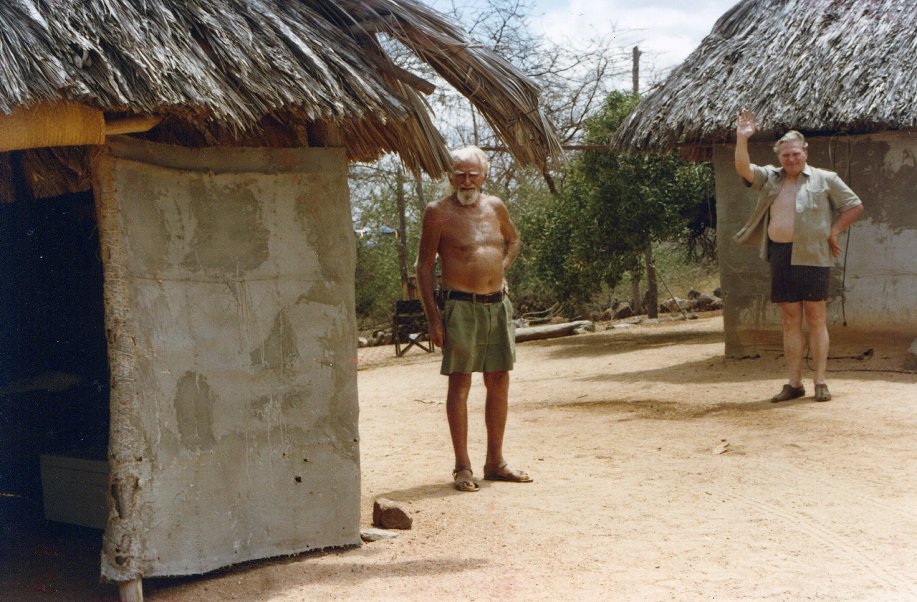 George Adamson and friend Dr. W Wolfgang TH Koos
Dr. Koos was a legendary practitioner and one of its great teachers of neurosurgery.
Born 14th, February 1930 - Passed away 31st March 2000 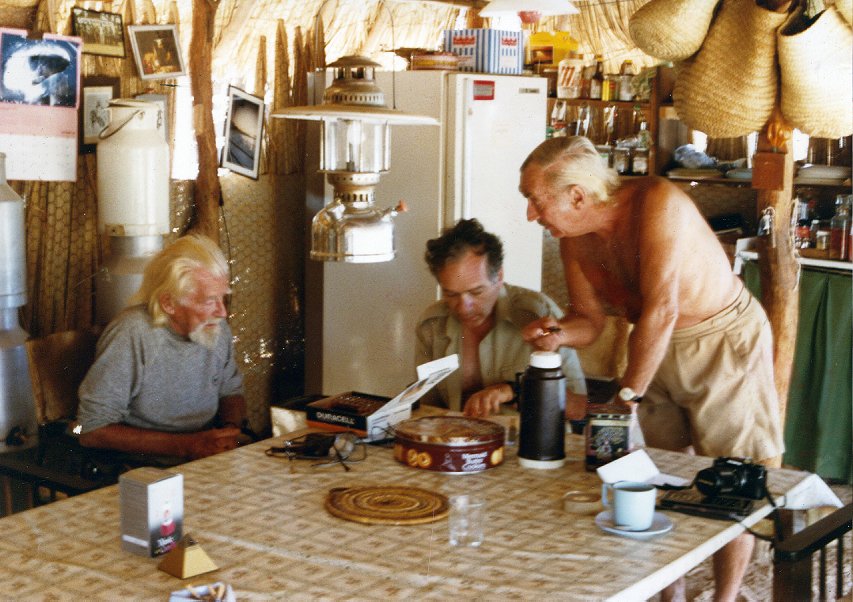 George Adamson and Dr. Andrew Meyerhold and Major Douglas Collins
in the dining hut at Kampi ya Simba - Kora Reserve in Kenya
Dr. Meyerhold, George's doctor, use to fly to Kora in a light plane every so often to give George a check up.
Major Collins, ex soldier and author was looking after George's accounts for him.

NOTE:  Major Collins served his country in the most remotest of areas and much of the time
was with a unit of native Somali Gendarmerie where he was in constant attack and
cournter attack mode against the shifta.  He managed to endure this hardship and survive. 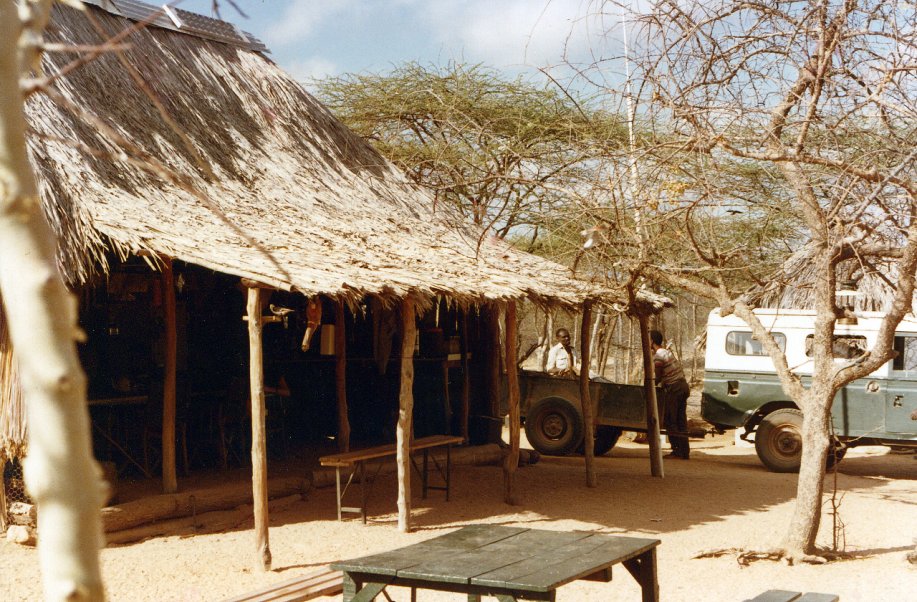 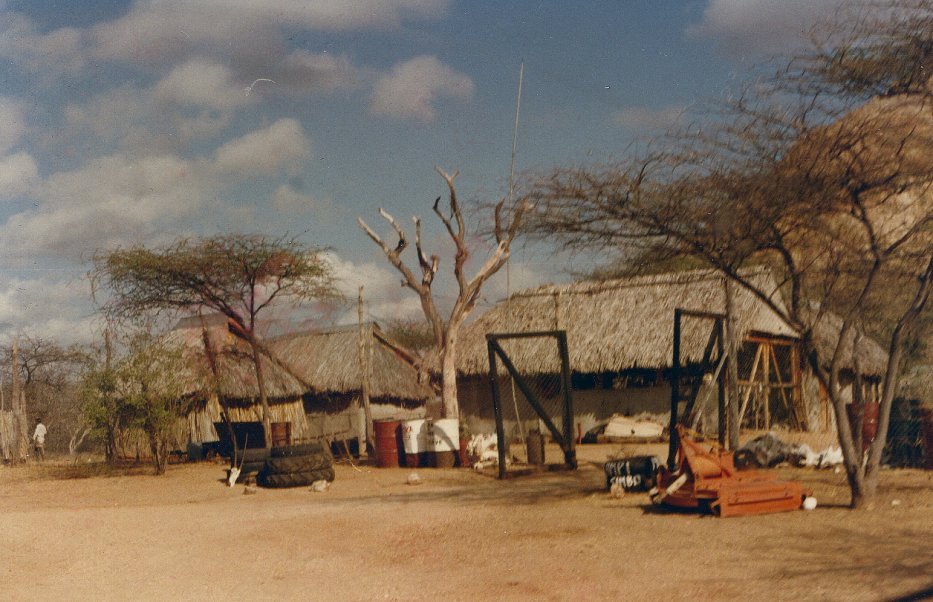 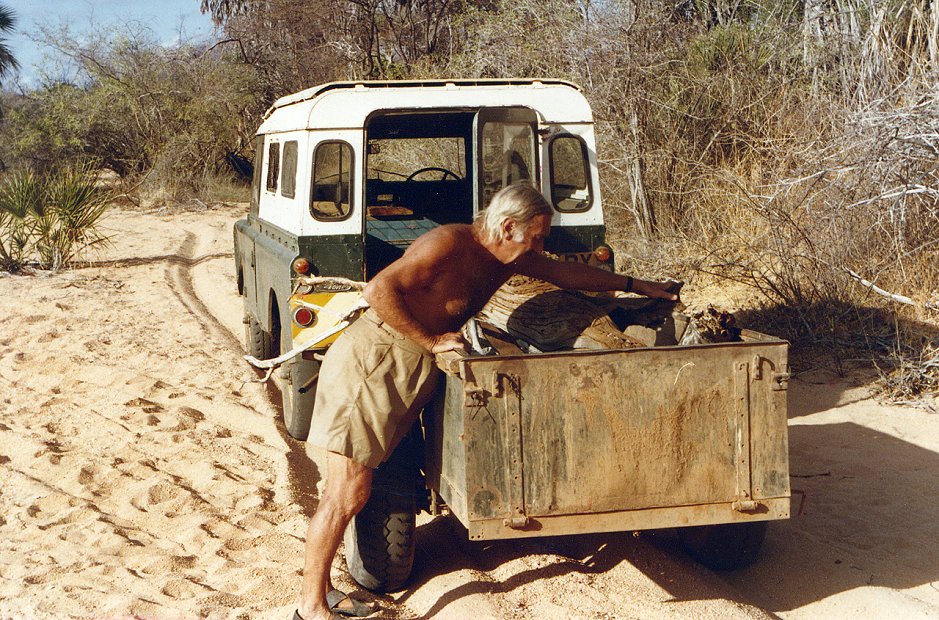 Major Douglas Collins does his share to help out around camp by collecting firewood. 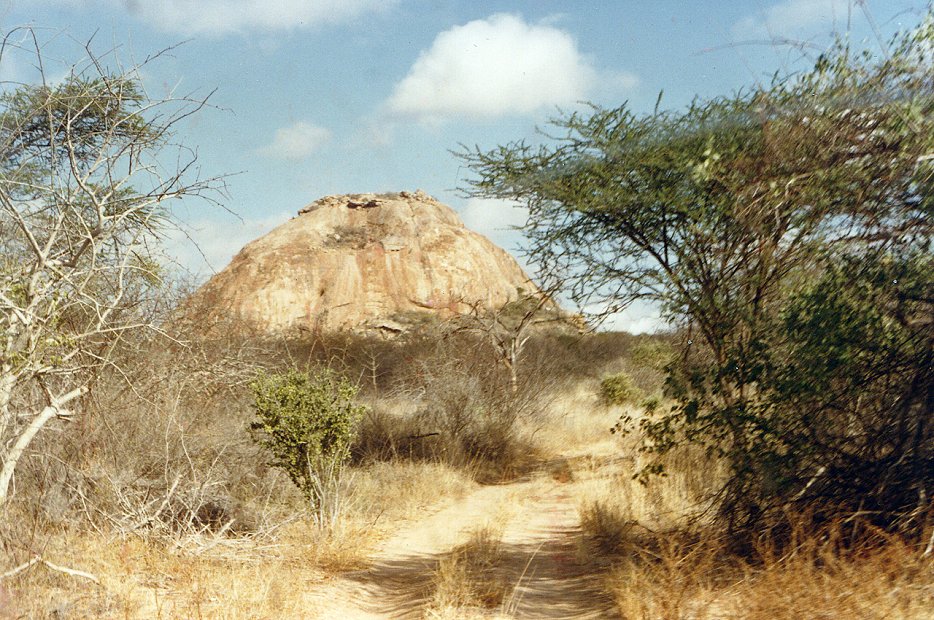 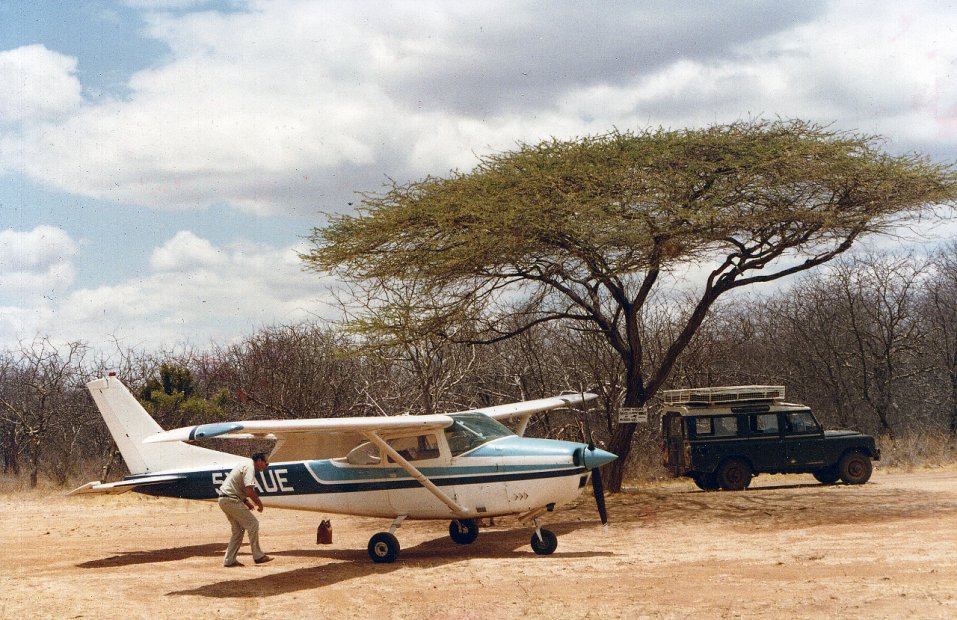 Dr. Andrew Meyerhold loading his plane at the airstip at Kora Reserve.
Dr. Meyerhold, George's doctor, use to fly to Kora in his light plane every so often to give George a check up. 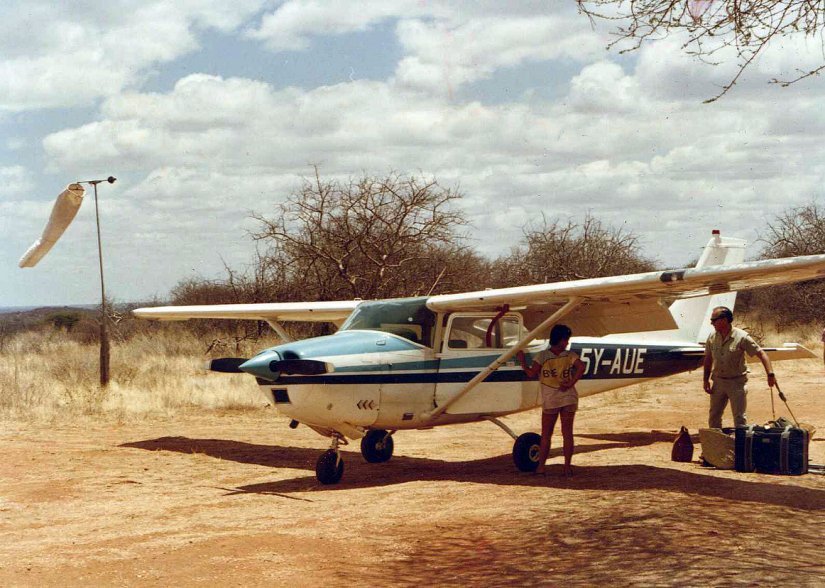 Dr. Andrew Meyerhold and a volunteer with some luggage at his plane.

Boy the Lion....Final Resting Place
Boy's final resting place is in the Kora Reserve.
George was laid to rest next to Boy and his brother Terrace and little SuperCub. 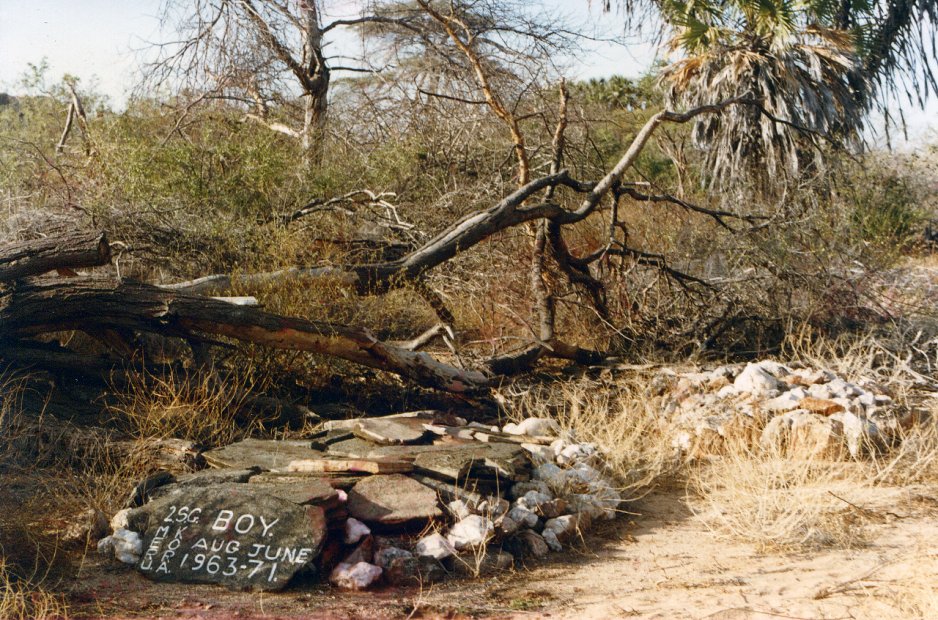 It is beleived but are not certain that the gave to the right is that of Super Cub. 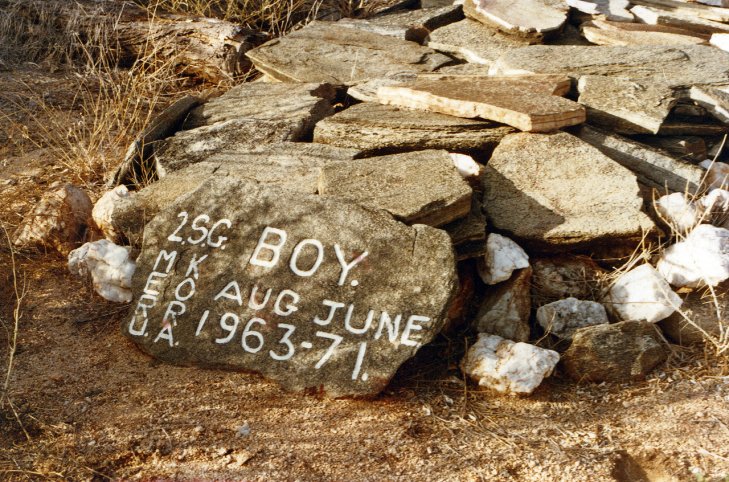 Boy the Lion played a role in the Oscar Award winning movie 'Born Free'.
Boy also was in movie 'Christian the Lion' and the beautiful documentary 'The Lions Are Free'.
(For information on the above mentioned films see the DVD/Books section on this site.)