Virginia McKenna received a HSUS award presented by Sean Astin
during the Humane Society of the US(HSUS) 2004 'Genesis Awards'.
Given Virginia's endearing commitment to animal welfare, not to mention her stirring speech,
it was little wonder that writer Chuck Austen was awestruck to share the same stage with the legend.
After accepting the Genesis Award for Outstanding Artistic Achievement for his work on X-Men Unlimited,
Austen commented, "To be on the same stage as Virginia McKenna, whose film was such an inspiration
in my youth,  is beyond words."

McKenna's two-decade role in animal welfare is not a job, not even a vocation, said her son in an
essay in the Genesis Awards program. It is a "mission, passionately delivered with every ounce of [her] being." 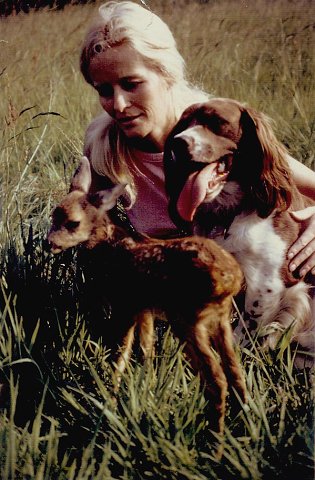 Virginia McKenna and her dog Jonnie with a fawn.
Jonnie the springer spaniel starred in the movie, "Ring of Bright Water" with the
human stars, Bill Travers and Virginia McKenna.  When the filming was over,
Bill and Virginia brought him back home to live with them in Surry.
Virginia and Bill 'rescued' Jonnie from a miserable life living in a kennel.
They instead provided him with a wonderful home where he was loved!
NOTE About Jonnie: You can see Jonnie at the beginning of the film
An Elephant Called Slowly,  also Christian the Lion and of course Ring of Bright Water. 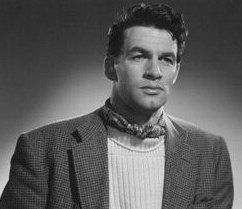 A web page about Virginia would not be complete
without including her husband and best friend Bill Travers.

In 1964, the 30th of August Joy wrote to a close acquaintance the following:
(Excerpt is from actual copy of letter written by Joy Adamson.)
READ Joy Adamson's comments about Virginia and Bill....

To read this entire letter and many others and gain insight into the life and thoughts of
Joy Adamson,  see the "Joy Adamson's Letters" web page on this site.